A couple of weekends ago, I installed the Wunderlich GPS mount on my RT.  The project wasn’t too bad now that it’s done.  There were a few complications that occurred during the process and this post will help with some tips.  Also, during the middle of the process, a couple of my buddies showed up to assist which was very much appreciated.  First up, I ordered part 8600887-888 from Wunderlich America. 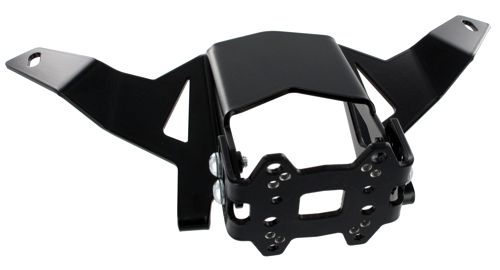 The installation was a bit complicated.  According to the instructions you have to loosen / remove several of the beemers torx t25 screws in order to get the bracket installed.  You even have to remove the mirrors in order to get to some of the screws.  That was probably the trickiest.  So here’s how I did it.

Step 1, dig through garage to find a torx t25 bit.  Hmmm….ok, given my lack of organization in the garage, this took awhile.  Ah, here we go, found a plastic bit holder with a bunch of torx bits, but guess which one was missing?  Of course, the one I needed.  Doesn’t this always happen?  Probably not to you, but it happens frequently in my garage and precipitates the next fun adventure which is a trip to Home Depot and the subsequent wife admonitions of “don’t you have enough tools?”  Off to Home Depot to the tool department and find some torx T25 bits – 2 per package – fairly cheap at less than 3 bucks and I’m on my way back home.  Oh, forgot to mention that I also bought a handy electric screwdriver from Ryobi because I might need it and all of my other electric screwdrivers are 10-20 years old and no longer work.

Now to get to the screw needed to remove the mirror, it is located on the bottom of the mirror housing.  To get to the retaining screw, you have to push the top of the mirror glass as if you were adjusting the mirror so that the bottom portion of the mirror comes out.  This will help to align the retaining screw with the hole.  This is the trickiest and took me multiple tries to get it accomplished.  I then put the newly purchased torx t25 bit into my trusty screw driver and proceeded to get it stuck going into the hole.  The problem is that the bit is shaped like all bits are shaped – hexagon.  Unfortunately, the hole is not quite big enough for that.  ARGHH!

Wait a minute, didn’t some tools come with this bike?  Removed the seat and guess what?  In the tool pouch is a round torx t25 bit in an “L” shape common to other hex drivers.  With this tool, removing the retaining screws were fairly simple.  You might be tempted to think that I wasted all of that time.  But you know what?  I enjoy doing things mechanical from time to time.  For me, trips to my local hardware store where I can browse the tools, parts, nails, paint, etc. can be cathartic.

[“cathartic” – is that the right word?  let me look it up.  From dictionary.com:

ca·thar·tic
adjective
1. of or pertaining to catharsis. (relieving of emotional tension)
2. Also, ca·thar·ti·cal. evacuating the bowels; purgative.
noun
3. a purgative.

Ok, good enough, but be clear that I am not talking about bowel purging at the Home Depot.]

The next complicated part of the instructions was how to position the lower bracket.  There is a hook on the lower bracket that has to go over a bar underneath the top dash cover.  The hook should be positioned so that it is in the up position and will latch over the bar from the bottom.  Then it is a matter of lining all of the screws up from the top.  Because the bracket has nuts that move about, this is pretty tricky as well.  We used a small hex key to line up the nuts on the bottom bracket once every things was assembled.  Then carefully put the screw in so as not to move the nut on the lower bracket.  Took a few attempts, but we finally got it.

Reassembly of the plastic was pretty simple.  Nothing too complex and now that I had the right tool, putting the mirrors back on was not too bad either.  Don’t forget to run the GPS wire before you put all of the plastic back on.  I ran mine down the right side of the dash and was able to conceal it pretty well.  So here’s a picture of the mount installed.

What was surprising is how “small” the mount felt coming out of the box, but I can tell you that the mount is solid in every respect.  The materials are fantastic.  About the only thing they could do to improve it would be to pre-cut the foam that is adhered to the bottom of the mount before placing on the bike.  Otherwise, the mount creates a VERY solid footing for your GPS.